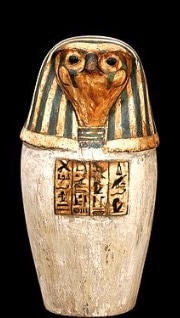 MDC: qbHsnwf, qbHsnf, qbH snw.f
Gardiner: ḳbḥ snwf
Budge: Qebḥsenuf
Transliteration: Qebehsenuef
Coptic:
Hebrew:
Greek:
Demotic:
Arabic:
English:
Kemetic:
Alt:
Pronounced: Qebeḥsenuf or Qebeḥsenuef
Meaning: ​He who pours libations for his brothers
libations is the act of pouring water out as a sacrifice to a deity, his name could be easily translated to He who refreshes his brothers.
Home:
Temple:


Features
He is a mummy with a falcon head


Roles
Four sons of Horu-Ur/Horus the elder who made up the four Canopic Jars. they assist the king in his ascension to heaven in the eastern sky by means of ladders. They were said not only to be his children but also his souls. As the king, or Pharaoh was seen as a manifestation of, or especially protected by, Horu/Horus, these parts of the deceased pharaoh, referred to as the Wesir/Osiris, were seen as parts of Horu/Horus, or rather, his children. were known as the Seven Shining Ones, protectors of the body of Wesir/Osiris. According to this myth, they were born from a lily flower that arose from the primaeval ocean. The classic depiction of the four sons of Horus on Middle Kingdom coffins show Imsety and Duamutef on the eastern side of the coffin and Hapi and Qebehsenuef on the western side. The eastern side is decorated with a pair of eyes and the mummy was turned on its side to face the east and the rising sun; therefore, this side is sometimes referred to as the front. The sons of Horus also became associated with the cardinal compass points.
​
Imsety – human form – direction South – protected the liver – protected by Asuet/Isis.
Duamutef – jackal form – direction East – protected the stomach – protected by Nit/Neith.
Hapi – baboon form – direction North – protected the lungs – protected by Nebet-Ḥut/Nephthys.
Qebehsenuef – hawk form – direction West – protected the intestines – protected by his mother Serket.

Connection to other gods

Epitaphs
nTr ȧ-- Great God
xnty imntt -- Foremost of the underworld
"I am thy son, O Osiris Ani, triumphant. I have come to protect thee. I have collected thy bones, and I have gathered together thy members. I have brought thy heart and I have placed it upon its throne within thy body. I have made thy house to flourish after thee, O thou who livest for ever"
​ref. Wiki