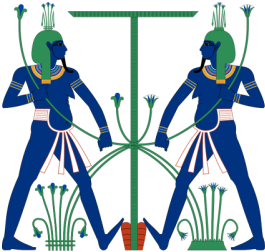 Priest names
(roles) priests were involved in rituals to ensure the steady levels of flow required from the annual flood. Located at Ta-Sety, Abu/Elephantine there was nilometer, a measuring device, was carefully monitored to predict the level of the flood, and his priests must have been intimately concerned with its monitoring.

Features
Hapy is show as an intersex person with a large belly and pendulous breasts, wearing a loincloth and ceremonial false beard. He is depicted with either blue or green skin, representing water. In Lower Egypt, he was adorned with papyrus plants and attended by frogs. In Upper Egypt, it was the lotus and crocodiles which were more present in the Nile. He is often pictured carrying offerings of food or pouring water from an amphora, but also, very rarely, was depicted as a hippopotamus. During the Nineteenth dynasty Hapy is often depicted as a pair of figures, each holding and tying together the long stem of two plants representing Upper and Lower Egypt, symbolically binding the two halves of the country around a hieroglyph meaning "union". Not to be confused with one of Horu's son Hapi by the same name.

Roles
Hapy is an intersexed god, who is probably shown this way to represent the fertility of the nile's annual flood. He is not considered the God of the Nile , but represent the annual flooding of the Nile and inundation event called the Arrival of Hapi. Hapy maintain the balance of the cosmos. He was sometimes considered the Father of the Gods because of his fertile.

The Hymn to the Flood
Lightmaker who comes from the dark  Fattener of herds Might that fashions all None can live without him People are clothed with the flax of his fieldsThou makest all the land to drink unceasingly, as thou descendest on thy way from the heavens.
~wiki