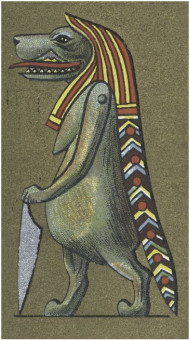 ​Home:
Temple:
Cult: All throughout Egypt
Adopted into Levantine and Minoan religions as well as Nubia in the royal rituals of Kerma

Features
Bipedal Hippopotamus, exposed human breasts with feline hands and feet and a crocodile tale and back often resting or carrying a sA symbol that means protection.

Roles
Goddess of fertility, women, childbirth, child rearing, and the home. She was a fearsome protector and fertility goddess. Charmes of the goddess were often worne by pregnant women. Considered her a demon in later times.


Epitaphs
nbt m pt : Lady of heaven
rrt : sow
sAt-ra (daughter of Rā)
Mistress of the horizon
She who removes waters
Mistress of pure water
Lady of the birthing house
devour the dead