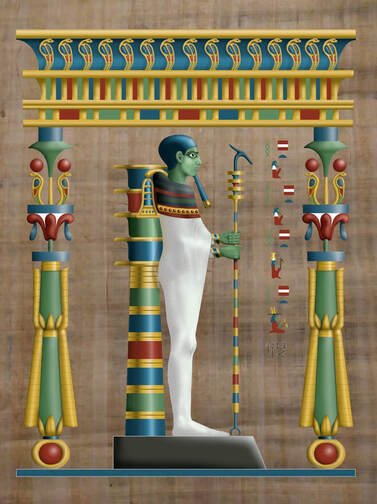 Features
A green skinned man who is mummified with a ceremonial beard and skull cap standing on a plinth, holding a staff with a combination of the Ankh (life), Djed pillar (stability) and the Was scepter (dominion). He sometimes adorns with the Atef crown or wearing a meant neckless. According to Budge he was considered the sun god and opener of the day like Tem was the closer of the day and his name might have derived from the semitic word pâthakh פֶﬨַח meaning
Opener'

Roles
God of creation, fertility, the arts, craftsmen, metalworking, stonemasons, carpenters, ship builders, sculptors, painters, architects. He is considered to be a demiurge who existed before all other things. Other wise known as the Great architect. God of the Necropolis of Saqqara. Opener of the day.

Words spoken by Ptah, Lord of religiousness, king of the TwoLands,
Perfect of face, who created crafts,
One who presiding over the great place at rest

•
Hail to you, Ptah, father of the gods,
To-Tjenen (Tate’nen) elder of the primordial gods,
sacred god to the noble shapes,
Very feared, who is located in the Headquarters-Venerable,
which authority is strong,
demonstrations prestigious,
the considerable strength
that prevails all in his power.
Respectable power, beloved,
in the face of prestigious appearance
Lord of the double feather,
And shiny ornaments,
Brilliant who makes the gods alive,
Radiating, who rises on his horizon,
Illuminating the Double – country of his charm,
Lord of light,
shining in brightness rises in every eye,
living that pierces the darkness,
shining sun disk
that runs the distant sky and crosses Douat.
The Pharaoh comes to you, O Ptah!
He comes to you, god with distinguished shapes !
Hail to you! In front of the primordial gods that you created
After being in existence as divine body,
Who has shaped his own body himself
While the sky was not yet come into existence,
That the earth was not yet come into existence,
That the flow had not sprung.
You shaped the earth;
You assembled your flesh,
You counted your members;
You were unique, made his place,
God who melted the Double – Country.
You had no father who engendered you
When you came to the existence,
No mother who gave birth to you.
Let us go, let us sing for him hymns!
He who created the gods, the men and all the animals,
Who created all the countries, the banks and the very-Green (= the sea),
on his behalf of creator of the Country!
Let us go, let us sing for him hymns !
He who brought the Nile outside its cave,
Who makes turn green the fruit tree,
Who creates the necessities of what goes out ceaselessly of him,
On his behalf respectable Noun!

Hymn to the God Ptah

Adoration be to Thee, O Ptah,
He Who founds the Two Lands, the mountains and the deserts,
and keeps them green through water which comes from Heaven,
He Who covers with dew the twigs of the trees which are in every mountain-land.
There is nobody who could live without Thee, because breath comes out of Thy nose permanently, and water out of Thy mouth,
the Tree of Life grows up upon Thee,
Thou makest green the land so that Gods, humans and cattle have abundance.
He Who brings forth the Nile from His cavern,
Who makes prosperous the Tree of Life
and cares about the portion of that which come out from Him again and again in His name of Nun.
He Who sets in motion the Primeval Waters of Heaven
and expels the water in the mountains continuously in order to keep alive mankind in His name of Ptah the Creator of Life

“Hail to thee! Thou art great, thou art old, Tatenen, Father of the gods,
God ancient from the beginning;
Who fashioned men,
Who made the gods,
Who began with the creation as the first creator,
Who created for all who came after him,
Who made the heaven; as his heart he created it;
Who hanged it up,
As God Shu raised himself;
Who founded the earth of thy own power,
Who circled in the primal water of the Great Green,
Who created the invisible world, which brings the dead bodies to rest;

Who let Rā come to make them glad,
As Prince of Eternity,
Lord of Eternity,
Lord of Life;
Who fills the lungs with air,
Who gives breath to every nostril,
Who vivifies all beings with his gifts.
Length of life, fortune, and fate are subject unto him
They live by that which goeth forth out of his mouth.
Who made contentment for all the gods,
In his form of ancient primal water;
Lord of Eternity, to whom Eternity is subject,
Breath of Life for all beings.”​
#ptH , #Ptah