Features
Wears Hemhem Crown or the symbol of Heka on his head with and ankh, flail and scepter. He is either depicted as a child with all the symbology or an adult god. Heka is created at the beginning of time by the creator Atum "before duality had yet come into being", Part of the Esna /Latopolis Triad Nit/ Neith, Khnemu/Khnum, Heka. Heka was said to have fought two snakes and defeated both. This is why pictorial representations of Heka show how he strangles two wounded snakes. Medicine and the activity of healers were regarded as a form of magic, so that the priesthood of the Heka dealt with medicine and healing rituals. Perhaps leading to the idea of the caduceus symbol ☤ pre Hermes.

Roles
God of magic and medicine. Heka fought two snakes, evil spirits on the bow of Rā boat which became a symbol of his power. 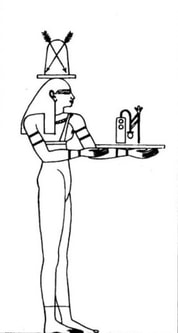 ​
".....to me belonged the universe before you gods had come into being. You have come afterwards because I am Heka." - Coffin texts, part of spell 261, First Intermediate Period to Middle Kingdom.


To reaffirm: " I am one with Atum when he still floated alone in Nun, the waters of chaos, before any of his strength had gone into creating the cosmos. I am Atum at his most inexhaustible - the potence and potential of all that is to be. This is my magic protection and it's older and greater than all the gods together!" - Book of Coming Forth By Day, New Kingdom.