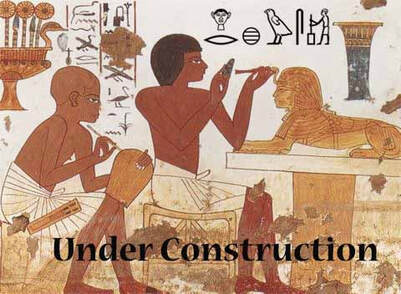 *VsoSO:
(Verb-subject, object with ending) Subject, Object
so: word endings love-lovely love-loveable action word that
has a suffix ending to express the object and subject


Dative
Differs from other adverbial phrases (ie preposition accompanied by a noun) in its tendency to fallow as closely as possible the word that governs it. Normal word order
smi sS sStA pn n nb.f m niwt tn/ The scribe reports this secret to his lord in this city. 'report scribe secret this to lord his in city this'

The word order is, however modified when the subject or object is a pronoun as well as when the preposition  /n/ governs a suffix-pronoun so as to form a dative case. The rule a noun must no precede a pronoun and that the dependent pronoun must no precede a suffix.
ie.   hAb.f Tw/ He sends thee,   hAb Tw sS/  The scribe sends thee
DA Tn sA.f/ His son ferries you across (or) You ferry his son (/Tn/ my be the suffix just as well as the dependent pronoun)

~nfr Hr AB construct
describe characteristics of someone or something
nfr, A part is refers to the person or thing begin described
Hr, B part is refers to something the person or thing owns or has
adjective quality to the owner rather then the thing owned
nfr Hr /good of face  'good one of face' *kindly*
A noun and adjective or noun phrase connection in a direct or indirect genitive
nfrwt nt Haw.sn/ those who have beautiful bodies 'Beautiful ones of their bodies'
aSA zrw / many of sheep, in English 'one who has many sheep'
nft n.f m hrw pn r sf /Better for him today then yesterday

Nonverbal sentences  without a subject
(nfr n.tn/ It is good for you 'good it you')
(iw mi sxr nTr/ It was like the plan of god)
* Predicate either has no proper verb or has (is, are, was etc.) links between subject and predicate expressed in English by part of the verb 'to be' often left unexpressed in Egyptian
ra m pt    (The sun is in the sky 'sun in sky')

i.e.
pAyw sDmw n nTrw/ The matters heard among the gods (plural endings w added to match the plural nTr)
pAyw bAkw n tpyw aw/ That were put into effect by the first chiefs.
ddw.f nin msy sArw/ If you speak to him, the young one will not come up short. (nin sArw= not a needy man)
HAty-a m Tzw n mdwt nfrwt/ Beginning of the collection of fine words (collection= Tz speech)

The, This, That, Those, These

effeminate and masculine agree with the nibis themselves and not with noun or pronoun (iri-at nb/ every room keeper, not iri-at nbt/ one pertaining to every room)

pr.ti/ You have come. (when the verb ends in t is can be omitted)
nxt.ti / Forceful
hA.w/ descended
Htp.win/ We are contented
iwa.kw/ I have been rewarded
itrw Sw.(w) nw kmt/ The river of Egypt is dried up
m.k wi Atp.kw m ianw/ Look, I am laden with woe
mH.ti/ It is filled
mH.w/ it was filled
qrs.wi/ They are burred
ann.ti/ It was returned
ii.kw/ I have come
aHa.n.tw Ha.w/ Then it was rejoiced (.n. past tense, hai- rejoice) Hai.f / Then he rejoiced)
inbw.sn fx.wi/ Their walls have been destroyed
mn.w/ It stuck
Hr.i Hs.w/ I was brave 'My sight is blessed' (Rutgers) or 'My face looked forward' "Confronting" (Baines) (Hsi- favor, praise)
ib.kw/ I thought
sDr.kw/ I laid (down.)
ref. James P. Allen, Rutgers

Possession
Hmt nsw : King's women
Hmt nTr : God's wife (Wife of god)
sA sy : a man's son
nswt nTrw : "the gods' king" or "king of the gods"
Connection
*You can put one now in front of another r-pw
Dba sAH : a finger or a toe 'finger, toe' (Allen, Hearst)

Adverbial uses a noun
indicated time or expressed by a noun used absolutely.
Sms ib.k tr n wnn.k/ Fallow they desire so long as you live.

Adverbial predicate
*always is masculine singular regardless if it has a plur or diffarent gender subject
sS m im/ Scribe is there
sS m niswt / Scribe in the city
sS nfr/ scribe is good
nfr nbt tn/ This lady is beauitful.
aA Hwt tn/ This house is large.

Subject as pronoun
*then it's dependent not a suffix pronoun
nfr tw / You (m) are good
nfr tn /you (f) are good
nfr sw / He is good
nfr sj / She is good
nfr tn / tn - You (pl)are good
nfr sn/ They are good
nfr st /It (n) is good, they (n) are good
nfrwi st / How good it is! (exclamatory)
*First person excluded and called a Nominal sentence
ink nfr / I am (a) good (one)
inn nfrw/ We are good (ones)
* ref ​https://en.wikiversity.org/wiki/Pre-Late_Egyptian_Reconstruction/Adjectives
Direct Genitive
Direct genitive is made by use of two nouns that are placed side by side
ex.
imy-r pr (overseer of the house, 'steward')
nb imAx (possessor of veneration, venerable)
rx xrt-ib nb.f (knowing the desire of his lord)
imy-r sxtyw mnx (efficient overseer of fowlers)
Indirect Genitive
Expresses possession. It uses genitival adjective (ny 'belongs to', n 'to' or 'for') and is place in between two nouns, the first noun is the possessed noun. It match in both gender and number.
ex.
nsw n kmt/ The king of Egypt
niwt nt nHH/ The city of Eternity.
wrw nw AbDw/ The great ones of Abydos
aAw n sxty pn/ The asses of this peasant.
Hmwt nt wrw/ The wives of the chiefs
inw nb nfr n sxt/ All good produce of the country.
imyw-r.k nw rwyt / Thy overseers of the portal.
sDAwt im.f nt pr-HD/ Valuable were in it belonging to the treasury.
Vocative
When pw(y) or tw(y) is used in place of a god or a human name.
ex.
hA nxt pw / Oh Nakhet! 'Oh, this Nakhet''
Hsw Hs tw Hry-S.f/ O praised one, may Arsaphes praise thee.
irt tw nt Hrw/ O eye of Horu.
sDm rk n.i HAty-a/ Hearken thou to me, O prince.
mk wi r nHm aA.k sxty Hr wnm.f Sma.i/ I will take away they ass, peasant, because it is eating my corn.
Questions
/in/ or /n/ goes at the front of the sentence
/tr/ or /ty/  normally fallows after the first word
(i)n ** tr
negative maker and question maker
stands as a question mark goes at the beginning of a sentence (not normally translated)
in ink tr smA.f/ Am I his confederate?