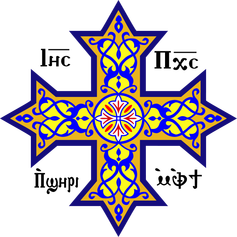 The Coptic language is the last evolutionary step of Ancient Egyptian. Ancient Egyptian might have been one the longest used languagesIt is a hybrid of Demotic Egyptian and Greek loanwords. The Coptic Alphabet is written using Greek letters with a few added letters from Demotic Egyptian. The language is still being used today by Coptic Egyptians. The word Coptic is from (Latin) Coptus which comes from qubṭ,qibṭ/ قبط‎ Copt (Arabic) which comes from the kuptaion/ⲕⲩⲡⲧⲁⲓⲟⲛ (Sahidic Coptic) > aiguption/ⲁⲓⲅⲩⲡⲧⲓⲟⲛ (Bohairic Coptic) > Aigýptios/Αἰγύπτιος (Greek), ḥut-ka-ptaḥ (Temple of the soul of Ptah) (Ancient Egyptian) a name for Egypt. And also from the (Greek) Kóptos/Κόπτος from kbt (Egyptian) a name for a town. Today the Coptics are a Orthodox Christians. Old coptic started around the 1st century. Most Old Coptic texts were non Christian Egyptian pagan prayers and magical papyri and most would be written from original Demotic or Hieratic texts. Once Christianity started to spread in Egypt there became a need for a Greek Egyptian hybrid language. The Coptic language flourished in the 2nd and 3rd century. Shenoute/Ϣⲉⲛⲟⲩϯ was an abbot in Egypt during the 4th and 5th century who spoke both Ancient Egyptian and Greek fluently, he fully standardized the language which is known as the Sahidic dialect.

The Coptic people are direct descendants of the Ancient Egyptians, who claim their own ethnic identity separate from Arab and African ethnicities. They have historically been persecuted​ and still are in many areas. Coptic is today mostly only spoken in Egypt and Nubia and is used liturgically. There is quite a few different dialects which differ from place to place in terms of phonology, morphology, and vocabulary.
Dialects of Upper Egypt

Sahidic (S)
​Upper Egypt is associated with the dialect of Sahidic also know as Thebaic or Theban. and abbreviated with a (S). From the region Sahid as well as Cairo, the Valley. It is pre-Islamic period and was the most widely used to write texts. It started in the beginning of the 9th century possibly dating back to the 4th century and is the dialect mostly learned out side the church.
ⲧⲙⲛⲧⲣⲙⲛ ⲕⲏⲙⲉ /t.mənt.rəm.ən.kēme (To speak the language of Egypt 'Egyptian language')
ⲧⲙⲛⲧⲕⲩⲡⲧⲁⲓⲟⲛ/ timentkuptaion from the Copto-Greek form ⲧⲙⲛⲧⲁⲓⲅⲩⲡⲧⲓⲟⲛ /timentaiguption/ ('Egyptian language').

Akhmimic
Akhmimic dates back to the 4th century and is the most archaic Coptic dialects from the region of Akhmim/Khmin/ Khent-min (Panopolis). One feature is the x remains unlike most other dialects where it becomes ʃ . ⲕ instead of ϭ

Lycopolitan
Lycopolitan, also known as Subakhmimic or Assiutic closely related to Akhmimic, yet manuscripts tend to be from the Asyut area. Used extensively for translations of Gnostic and Manichaean works.

Bohairic (B)
Lower Egypt is associate with the dialect of Bohairic also know as Memphitic and abbreviated as (B). From the province Bohairah, the southwest of Alexandria, the Nile delta from around 4th century, but more texts come from the 9th. This dialect is the one most used today and is spoken in the Church. It replaced Sahidic in the 11th century.
ϯⲙⲉⲧⲣⲉⲙⲛ̀ ⲭⲏⲙⲓ/ ti.met.rem.ən.khēmi (To speak the language of Egypt 'Egyptian language')

Fayyumic
Fayyumic or Faiyumic are older version of Bashmuric. It comes from the Nile Valley in a province of Faiyum/Ⲫⲓⲟⲙ/ pA-ymā (Crocodilopolis) from around 3rd century to 10th. This is where you get the r, l cross over. They used ⲗ for l while other dialects used ⲣ for r. Replaced by Sahidic.

Oxyrhynchite
Oxyrhynchite or Mesokemic is the dialect of Oxyrhynchus and areas around it. It is one of the youngest dialects. Oxyrhynchite is similar to Fayyumic and is attested in manuscripts from the fourth and fifth centuries.