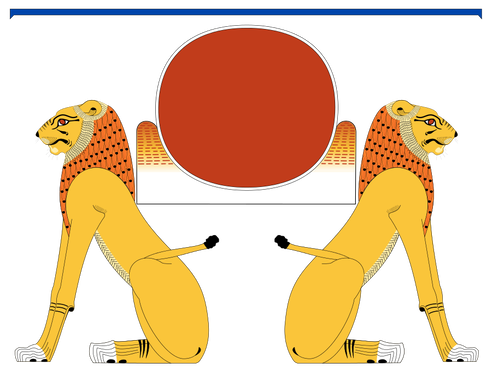 
Features
Originally portrayed as a torso of a recumbent lion with a widely opened mouth. Later on he was depicted as two merged recumbent lion torsos looking away from each other. Middle Kingdom onwards Aker appears as a pair of twin lions, one named Duaj 'yesterday' and the other Sefer 'tomorrow' (needs ref)


Roles
One of the earth gods guarding the "gate to the yonder site". A protector of the deceased Kind against snakes in the underworld. replaces the god Kherty, becoming  ferryman of Ra in his nocturnal bark. In the Book of the Dead, Aker also "gives birth" to the god Khepri. Aker is asked to hide the body of the dead Wesir/Osiris beneath his womb, Aker is protected by the god Geb.

Epitaphs
He who's looking forward and behind