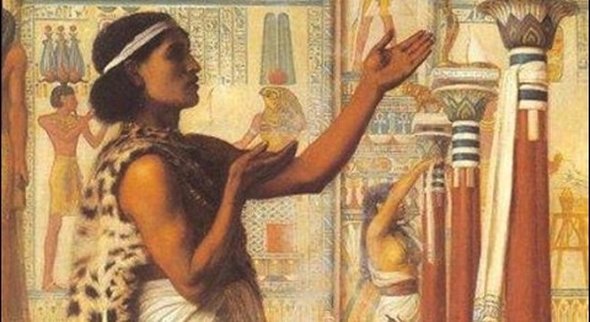 The Language of Ancient Egyptian​

**Disclaimer**
This list has been compiled for personal research prepossess only and I wanted to share it with all who care to learn from it. I would also like to give credit and a huge thank you to the makers of the program Marcion whom without, I wouldn't have been able to do half my research. If you would like to read more about Etymology look for mbooks by Antonio Loprieno, James P. Allen and Jaroslav Černý.

Please keep in mind Egyptian was spoken for thousands of years, there is some distinct differences between Upper/ Sahidic (S) and Lower/ Bohairic (B) and some other dialects. When at all possible I have show these differences when I can find documentations for them. I believe it is important to still study Coptic in aiding our understanding on how to pronounce Ancient Egyptian. If one studies the etymology of a word and looks at all the neighboring cultures and their languages around at the time it is possible to reconstruct Egyptian to a certain extent. Although people will always disagree. This etymology page was started by me years ago in hopes of reconstructing some of the words of Ancient Egyptian and has expanded greatly over the years. People have argued ever since Hieroglyphics were cracked on how to pronounced the language and the ignorance seems to be getting worse. There is no debating that Coptic was the last evolutionary step in the Ancient Egyptian language. It is also a good to look at other languages as well, but keep in mind they have their own set of rules and etymology so it isn't always the same as medu netjer. Letters are changed or evolved or are dropped altogether.

One must remember the Coptic language is a a combination of Demotic (Late Kingdom Egyptian) and Greek combined. It is not a purely Middle Egyptian based language. By the time Demotic was around the language had evolved and many things started shifting and changing. Demotic is derived from Hieratic, a cursive version of Hieroglyphics and from Demotic came Coptic. The Coptic alphabet is derived from Greek letters and some sounds lifted from Meroitic as well as Egyptian. Greeks also used the Egyptian beginnings of many words and added their traditional endings to a lot of the names and gods. Such as the Egyptian god known now as  'Horus', this name comes from the Greek (Hōros/ Ὡρος) with the ending which was derived from the Egyptian (MDC: Hr, Hrw) pronounced Hōr or Hōru. Now add the Greek/Latin endings of 'us', 'is', or 's' and you get Hōrus, or Anubis from the Greek (Anoubis/Ἄνουβις) adding the (-ιν) or (-ιδον) for Greek (masculine ending) and finally in Latin Ănūbis (-is) or (-ĭdis) (masculine ending). The name 'Anubis' comes from the Coptic from Anoup that later turned into Anoub Late Kingdom. The 'p' and 'b' are often interchangeable. Anubis's original Egyptian name was Ȧnpu from (MDC: inpw) or possibly Anoupu from the Akkadian Anapa. Such as the 'is' ending in Isis from the Greek form (Īsis/Ἶσις) is, ĭdis or ĭdos (feminin ending). Isis in Egyptian is (MDC: Ast) pronounced Iset or Auset, Ese Late Kingdom. It is also important to keep in mind that sometimes there is alternative spellings of a given word in Egyptian and sometimes gods have more then one name. We can examine the alternative spellings of words for more help in how to pronounce words.

Some have also claimed and with good evidence that from Demotic to Coptic the 't' was dropped in pronunciation, and in Coptic wasn't written, but not always. It is a good rule to check the Coptic equivalent if it can be found, but also good to keep in mind the language has evolved. I have seen no proof to suggest the 't' wasn't originally pronounced. Although it's possible with words such as /sn/ (brother) and /snt/ (sister) it was always pronounced. Or it was always pronounced like it is in Coptic son/ⲥⲟⲛ (brother) (S, B, O) and sōni/ⲥⲱⲛⲓ (Sister) (B, F), with the (i) as the distinction between male and female. But it can also be argued it was pronounced son (brother) and sōnit (sister) Middle Kingdom to Early Kingdom. At any rate every year there is more and more uncovered. Perhaps one day we will get definitive proof of the pronunciations for all Kingdoms and dialects.

Some argue there is no vowels in Ancient Egyptian which is not entirely true as well some have called the vowels weak consonants. Whatever you wish to call the A, a, i, y, w, and wA they are present and are pronounced. I believe Coptic and Greek have proven other wise for the definite presence of vowel sounds. Please view the Alphabet under the heading Uniliterals ABC's  + , as well as this page for more information. Some have even gone so far as to say there is no point in even learning to speak Ancient Egyptian because we do not know how it was pronounced. Please tell this to all the professors at Cambridge and all over the world who still teach the language and yes you can even get a degree in the language. These people have dedicated their lives to the Etymology study of the Egyptian language and who as well are fluent in Greek, Coptic, Hebrew and many other Semitic languages. I personally have spent over 10 years studding the language and etymology. There is history to any given language you just can't excuse. Without the background in the Etymology of the language I am afraid those are very uneducated opinions. This is why the study of etymology is so important especially to "dead languages". Also keep in mind Coptic was never not spoken and is still spoken today so technically medu netjer isn't a "dead language" anyway. I have seen a few people attempt to reconstruction the language, but most have no background in etymology nor do they look to sister languages outside of African languages. Coptic and Greek spellings of Gods, places and royal​ names is how they were able to crack the Ancient Egyptian language using the Rosetta Stone. Some will strictly only look at African Languages which have a few borrowed words, but are not a living example of Ancient Egyptian. It still however should not be ignored. The Rosetta Stone is comprised of Ancient Egyptian hieroglyphs, Demotic script, and Ancient Greek. If you would like further proof this language can be spoken and written then I urge you to look into how they cracked it and the Rosetta Stone itself.

This section is a collection of Egyptian words and a lot of Etymology research I have collected for years in the hopes of reconstructing some of the words of Ancient Egypt. I have given the evolution of the words with written proof, not just speculation or opinions, however my opinions are given in suggested fixes on how to pronounce the given words. I have suggest a fix to the word based upon the evolution itself. Please take it or leave it, that entirely up to you. I will not force my opinions on anyone, but rather urge you to study. Become your own scribe and the world may open up to you as it did for me. Enjoy.
Senebty
​
Etymology of the mdw nTr Language
Archaic Egyptian (Early Dynastic Period) (2600 BCE)
Old Egyptian (2686-2181 BCE)
Middle Egyptian (until the Amarna Period) (2055-1650 BCE)
Late Egyptian (3rd Intermediate Period) (1353-700 BCE)
Demotic (7th century BCE-5th century CE, until Roman Egypt)
Coptic (1st-17th century CE, until Early Modern Period)

Coptic (Demotic Egyptian mixed with Greek still spoken today)
For more info on sounds and reconstruction here
Greco-Bohairic​ (GB)
reformed modern pronunciation leaning more on Greek sounds
Old Bohairic (OB)
used in the Monastery of St. Shenouda in Rochester and was reconstructed by Dr. Emile Maher. is evidence-based,
using archived sound recordings and transcriptions of the oral tradition of Zeneya, Dabeyya, and other villages made
by various scholars
Old Coptic (O)
Archaic Coptic (AC)
Upper Egypt (UE)
Achmimic (A)
The dialect of the town of Achmim of Upper Egypt, (Greek Panopolis). Phonologically the most archaic dialect.
/x/ is realized as /ʃ/ in most other dialects.
sub Achmimic (sA)
Combination of Sahidic and Akhmimic dialects
Lycopolitan or Subakhmimic or Assiutic (L)
The dialect closely related to Akhmimic. Manuscripts written in Lycopolitan tend to be from the area of Asyut.
Extensively for translations of Gnostic and Manichaean works
Sahidic or Thebaic (S) tmᵉntrᵉm.ᵉn.kēmə/ⲧⲙⲛ̄ⲧⲣⲙ̄ⲛ̄ⲕⲏⲙⲉ
Main Upper Egyptian dialect, most biblical texts are written in. Around Hermopolis
Sahidic /Achmimic (Sa)
Combination of Sahidic and Achmimic mostly Theben.
Sahidic /Fayyumic (Sf)
Combination of Sahidic and Fayyumic.
Nag Hammadi (NH)
Gnostic codices written in this dialect. So named after the town Naj 'Hammádì at the Jabal al-Tárif where The Gnostic
Gospels were found
Lower Egypt (LE)
Used in the Delta (Lower Egypt)
Bohairic​ or Memphitic​ (B) timət.rəm.en.khēmi/ϯⲙⲉⲧⲣⲉⲙⲛ̀ⲭⲏⲙⲓ
Western Nile Delta and Alexandria, a widely standard dialect dates back to the 4th century and is the liturgical language of
​             the Coptic Orthodox Church today surpassing Sahidic
Fayyumic (F)
The dialect of Fayum of Lower Egypt, spoken along the Nile River valley chiefly on the west bank, survived until the 8th century
Fayyumic/Bohairic (Fb)
Combination of Fayyumic and Bohairic.
Oxyrhynchite or Mesokemic (M)
Similarities with Fayyumic and is attested in manuscripts from the fourth and fifth centuries.

Key for symbols
() a letter placed between () means it can be pronounced, but sometimes isn't written or pronounced
V stand in place of a vowel if it is not know what it might be

Letters evolving
rw > r
i > ȧ or a (ah)
g > k
q > k
y > i (ē)
Egyptian evolution into Coptic
​ (letters can vary depending on the word)
' t '  has been suggested to not be pronounced at the end of a word when the word is singular, but is still written.
ie. /mAat/ pronounced ma'āt (true, righteous, just) > /mAa/ pronounced ma'ā  (true, righteous, just)
If this is true it might be strictly a late kingdom concept leading into Coptic.


***Note***For the purpose of this section I have used MDC and then other renditions of the language as well as other cultures borrowed words. All references are located at the bottom of the page.

For more help with the Hieroglyphics pronunciation

Hymn to the Goddess Isis
(from the Inner Shrine (room X, north wall) of Her Temple at Philae)

Figuring out sounds through names in hieroglyphic is how medu netjer was originally cracked. If you would like a longer list of Egyptian names click here

Thermutis (mother of Moses, one who fished him out of the Nile)
Renenutet (some connection between the name Thermuthis and the Egyptian goddess of names
and nursing) Egyptian connection
Bithiah from Biṯyāh, Bityá​ /בִּתְיָה‎‎ 'daughter of Yah' 'daughter of god', Bat-Yah 'daughter of YAh'
(wife of Pharaoh) Hebrew
Thermuthis, Tharmuth, Thermutis, Thermouthis (priestess, daughter of Pharaoh)
​     (Josephus Jewish historian 'Antiquities of the Jew' ) Gnostic
Merris or Merrhoe (Artapanus) Christianity
Asiya/ آسية (Hadith) Arabic

aaf : (squeeze out, to wring out, to press out oil, to strain)
ōfā /ⲱϥⲉ Coptic

brbr : (to cast out, to wreck, to overturn)
bārbōr /ⲃⲉⲣⲃⲱⲣ Coptic

bs : (introduce (someone into), install, initiate (into), enter, bring in (a state of affairs), reveal (a secret)
~ bs.t : you have been introdued (F)
buztVʲ > best (Loprieno) Alt Pronunciation

fAk : (be bald)
fkṱ (priestly title 'the bald one') Demotic

Hr(y) : (to inspire dread or terror; to be(come) awesome or terrible, to dread, to anticipate)
ḥl Demotic
ḥōl/ϩⲱⲗ Coptic

Htp : altar
* /t/ has said to not been pronouced by somewhere around MK to LK and possibly moslty a silent letter in Egytpian words
/Htp/ would have only had /Hp/ consonants pronounced, then with missing vowls added back in from Coptic you
​              get ḥəpʰā. Notes
ərpʰā/ⲉⲣⲫⲉⲓ (altar) Coptic

m bAH : (before, in the presence of)
em mah /ⲙ̀ⲙⲁϩ Coptic